At Knockrow Ridge Coffee our focus is simple….

Where we came from

Nestled in the scenic Northern Rivers district of New South Wales, Australia, Barry Heffernan was a pioneer in coffee growing, processing and roasting. He established Knockrow Ridge Coffee and his roasting house on his property in Knockrow in 1992.

Barry retired in 2014 after 22 years in the industry where he grew and harvested coffee, initially by hand and later by mechanical methods and subsequently processed in infrastructure that he built for purpose.

Barry custom roasted his beans in the same roaster that we use today. As individual operators came and went some grew into larger companies expanding beyond the Northern Rivers into new and existing Australian markets. Their efforts and those of the many growers, roasters, and of course the baristas in the Northern Rivers area have now established our region as an important part of the Australian coffee industry. We are recognized as producers of consistently high quality fresh coffee. 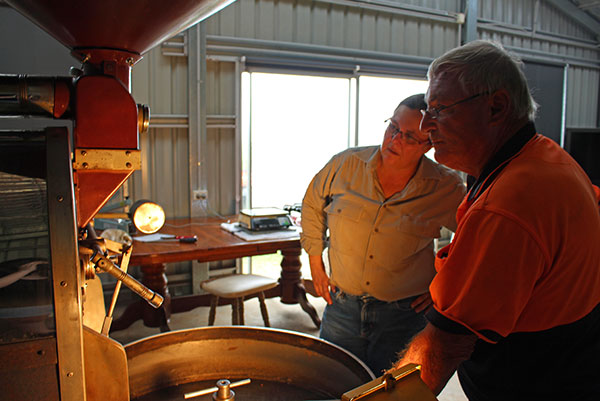 Where we are going

Today Knockrow Ridge Coffee maintains many of the original traditions. We are committed to sourcing only 100% Australian grown Arabica coffee beans, the roasting, packaging and distribution of our product is undertaken at our roast house in the hinterland to Byron Bay.

Our customers want consistency, high quality freshly roasted coffee and we strive to meet this demand. Barry still stops by to ensure that we remain true to the brand he established and remind us that it’s important to always focus on the customer, run a tight ship and let nothing get in the way of quality. We feel privileged to have his continued involvement.

The number of Specialty Coffee Roasters located in the Northern Rivers area has exploded in the past 5 to 10 years. Marketing opportunities are tight and as Knockrow Ridge Coffee looks to new opportunities we remain committed to honouring the loyalty of our many longstanding customers.

We don’t want to take over the world – we just want to make really great fresh coffee and bring it to your door.